The West coast Portland! Part One

Ahh, my favorite thing to do on work trips after long meetings, hang out in my pj's, in a comfy hotel bed and watch TV.  But before I did this favorite thing, I did my other favorite thing, exploring!! I explored the amazing West coast city of Portland.  For those that know me, know I lived in Portland, ME for a few years.  I have never been to Portland, OR and I have definitely been missing out, it's amazing!

After work, I decided to go explore.  I sent out a "tweet" and asked a few people what are the top things to do if I only have a few hours of free time to spend in Portland.  I specifically asked one of my favorite bloggers (http://www.restoredstyle.com/ or @restoredstyle on Twitter) since she is a native.  Wow, she made mye whole night with her divine suggestions.  I am staying downtown on Pine Street and her suggestion was to visit NW 23rd which I think is called, oh damn, I forgot, something District.  But before I get there, I had a great walk.  I needed to break in my boots for the Fall and who else was going to do it so I decided to walk the 20+ blocks.  The weather had a slight Fall chill and was perfect.  The funny thing about walking in a stange town/city is often after having a great walk, I mention to someone that I walked through a particular neighborhood and I get that look, you know that look, "you walked where?  By yourself??"  So, as I was walking and taking in the scenery, all the people seemed normal and then after a little bit, I ran into a Whole Foods so I knew I was going to be alright.  Then peeking its cute head around the corner was the word "Elm" so I had to go inspect the possibility I would be able to look at merchandise in 3-D vs. on glossy pages.  Very inspirational.

When we bought our couch, I REALLY wanted a gray couch but I lost to my 2nd choice which was an ivory/cream color.  Well, my bestest buddy Copley has turned that couch into a brownish tint.  We want to eventually get a slip cover so maybe I will get that gray eventually?  Not sure.  Anyhow, all their fun pillows and odds and ends were so inspiring.  They had these great bottle centerpieces.  All of these photos are from West Elm and are West Elm merchandise. http://www.westelm.com/ 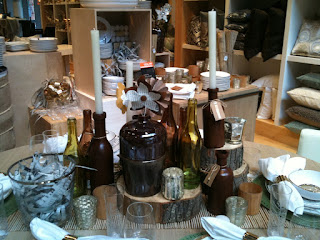 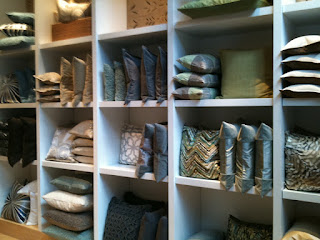 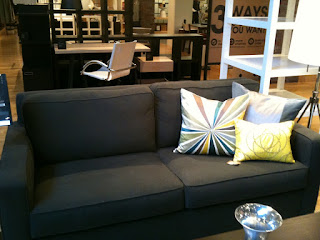 Henry sofa - West Elm
Below is the view I had most of the day in my meeting.  It WAS beautiful but also depressing that I was in a meeting and not out there, exploring. 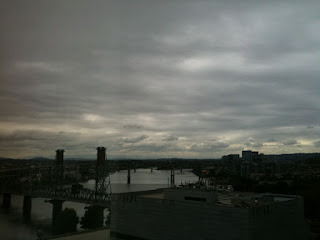