One is silver and the other gold. 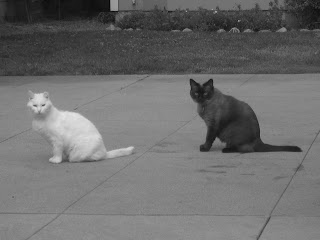 In the last few years I have noticed friendships that were near and dear to my heart have fallen by the wayside and others just feel like they don't exist anymore. I am at that age where my friends and I have just so much going on, sometimes keeping in touch just sounds like another fantasy. With Facebook, IM and Twitter, I often make the mistake of just keeping up with them on social sites and not actually reaching out and giving them a call. I have many friends with young children and as silly as this sounds, I don't want to bother them. I feel like they are too busy with their kids and being a mom that my life would probably sound trivial to them. And my thoughts on this sometimes are justified when I call and never get a call back. Then I have other friends where I know that we are still close but geography just keeps us apart and if we see eachother once a year or 20 times a year, we are still all good.

I often want to reach out and ask these friends who don't call back if they are mad at me or if I have done something wrong but I don't want to sound dramatic or needy. I feel like friendships take effort no matter what else is going on. I might not have kids but I do have other obligations and priorities and have ALWAYS made an effort to remember birthdays, arrange nights out, get people together. I always tried to make it to birthdays and celebrations. But now, even though I'm 3000 miles away from most of my good friends, over the past few years, I have started only making efforts with the ones who make an effort back. It might seem selfish but I have learned that some friendships I cherish weren't cherished back (or aren't) and I just have to let them go. It's not anyone's particular fault but just two people growing apart. I won't lie, sometimes I think that sometimes it is a lack of effort that causes the growing apart but still, it is a feeling that makes me sad, not mad.

My goal is to pick up the phone a little more often and just say hi. EVEN when I don't think I have anything new to share.
Email ThisBlogThis!Share to TwitterShare to FacebookShare to Pinterest
Labels: friendship