Tampering with the natural balance.....

I was watching Oprah about a year ago and saw Alicia Silverstone and the guy who wrote The Omnivores Dilemna, Michael Pollan and the founder of Chipotle.  It was really a life changing episode and I know that sounds so cliche but it's true.  Now to get on my newly found soapbox for a minute.  I will add this note, it's ALL about making choices that are right for you, just be educated about your choices. 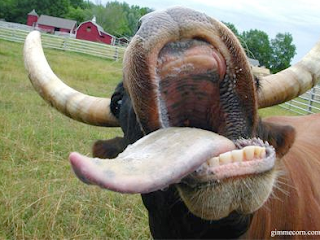 It all started around the movie Food, Inc. which is not just about animal cruelty and "harvesting" animals but also talks about this company, Monsanto, who basically bullies the small farmer. You may have tried their products a couple times, corn, soy, cotton and now alfalfa.  Nowadays, these crops are mostly all genetically-modified (GMO or GE for genetically engineered).  I don't want to write all about the issues with GMO and the risks but I will say this.  Monsanto owns Roundup and thier seeds are called Roundup Ready.  The seeds are genetically modified to inoculate the plants against a herbicide, um called Roundup.  In short, Roundup kills everything but the GMO plants.  So this corn, soy and now alfalfa can withstand a heavy duty herbicide and then is being fed to the animals you eventually eat, processed foods or straight into your body.  I actually prefer to stay away from soy but it's VERY hard.  The Supreme Court just lifted a nationwide ban on planting GE alfalfa seeds.  Anyhow, read more about it on http://www.npr.org/. (http://www.npr.org/templates/story/story.php?storyId=122498255)

Alicia Silverstone, yes Cher in Clueless, wrote a book called The Kind Diet and it's about flirting with being a vegetartian, a vegan or a "super-hero."  She is very friendly about it, offers great tips, yummy gooey recipes, and says even if you are vegan one day a week you are making a HUGE difference.  I will write more about her book in a future post.

Chipotle is another burrito take out place with one exception.  They are a growing chain that tries to buy all thier meat and veggies from local farmers and try to get as much of it as organic as possible.  They try to buy ingredients which are, "raised with respect for the animal, the farmer and the environment."  Makes you feel a little better about your 2lb. $6 dinner that parks you on the couch for the rest of the night.